THE RAMAKRISHNA MISSION VIDYALAYA
The Ramakrishna Mission Vidyalaya had a humble beginning as a school with a single student under a thatched roof in Coimbatore in 1930. The foundation stone was laid by Mahatma Gandhi on 7 February 1934, and the institution was affiliated to the Ramakrishna Mission in January 1935. 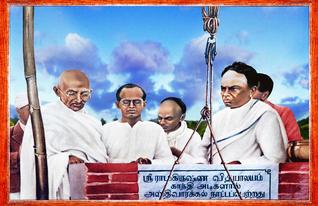 Thanks to selflessness and dedication of the founder, Dr.T.S.Avinashilingam, and to the devoted, group of teachers who rallied around him, the institution has grown from a simple school to a major educational complex sprawling over an area of nearly 300 acres, with facilities for education from pre-school to postgraduate and doctorate levels.

The Vidyalaya has in its campus a dispensary, a post office, and a branch of the State Bank of India to serve the student community and also the people in and around the campus.

As envisaged by the great Swami Vivekananda, the institutions in this campus strive hard to impart man-making and character-building education to the youth, and try to inculcate in them self- reliance, self-control, selflessness and such allied qualities that go to develop character.